The decision to take on a new challenge is rarely easy, but that hasn’t deterred Blythedale Children’s Hospital (Valhalla, N.Y.) and Burke Neurological Institute (White Plains, N.Y.) from embarking on an unprecedented journey to change the future of pediatric neuroscience.

Three years ago, the Burke-Blythedale Pediatric Neuroscience Research Collaboration was launched. This partnership between a research institute and children’s specialty hospital is the first-of-its-kind in New York State, and one of only a few in the country.  Scientists and clinicians, from each preeminent institution, team up to bring their expertise and resources to the project.

The goal of this landmark five-year, multimillion dollar collaboration is to study and treat the developing nervous system, while working to improve movement, vision, and cognition impaired by stroke, traumatic brain injury, cerebral palsy, birth defects, and other neurological conditions.

Three unique and innovative areas of research are targeted: Vision Recovery (evaluating and treating children with vision impairment) directed by Dr. Glen Prusky; Motor Recovery (total or partial paralysis of one side of the body) directed by Dr. Kathleen Friel; and Cognitive Recovery (diagnosis of cognitive impairments and interventions aimed at improving function of memory, thinking and feeling) directed by Dr. Sudhin Shah.

Dr. Jason Carmel, a pediatric neurologist and neuroscientist, helped to initially create the Collaboration and became its first Director of Research until his departure in 2018. 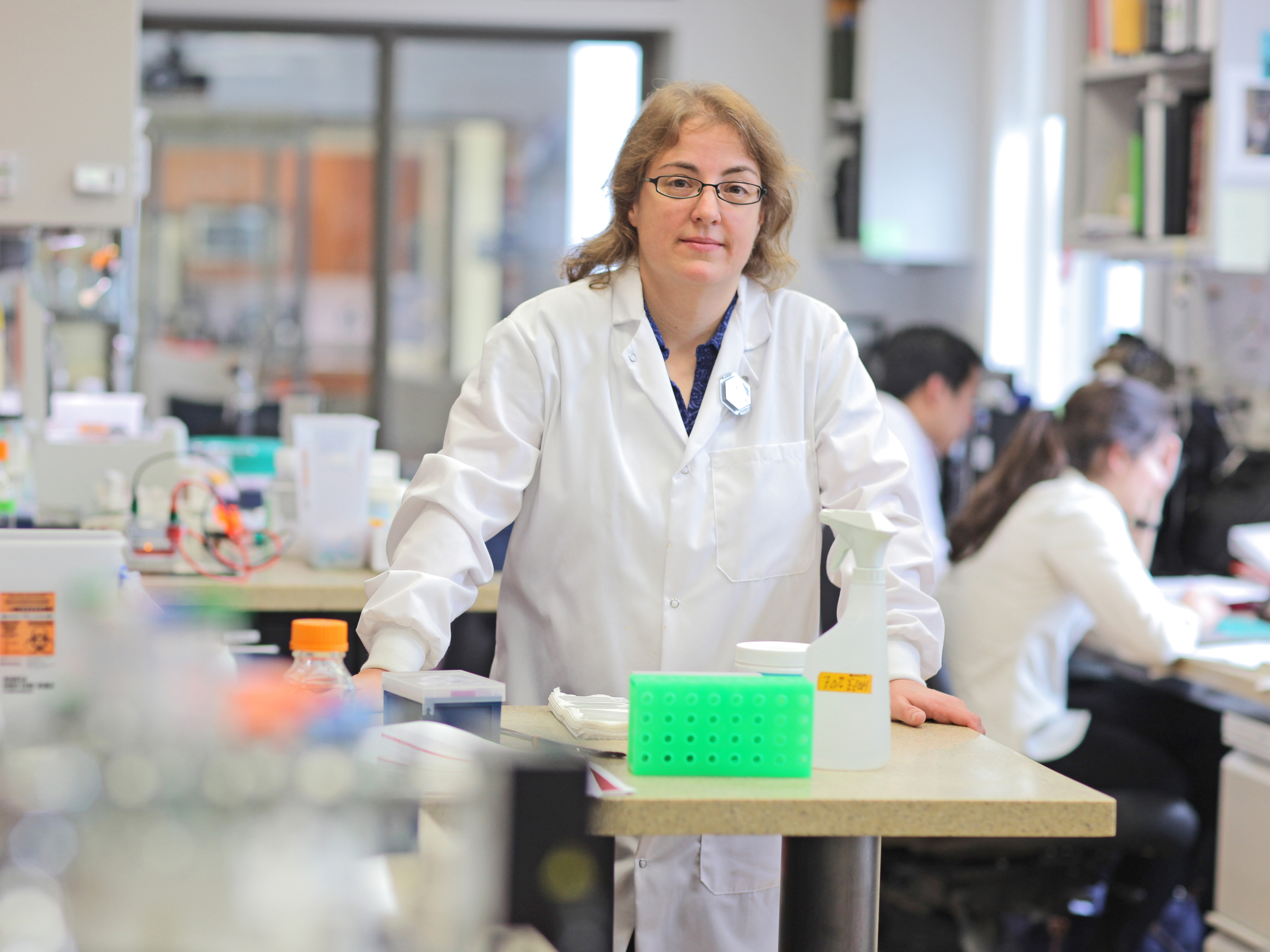 “This Collaboration is a continuing commitment to bringing basic scientific research from the labs at Burke Neurological Institute to patient beds while developing a culture of research at Blythedale Children’s Hospital,” said Dr. Willis.

There aren’t many hospitals investing in the future this way and I anticipate this is something other places will adopt as well to actually change the way that brain-injured kids are treated and assessed.” 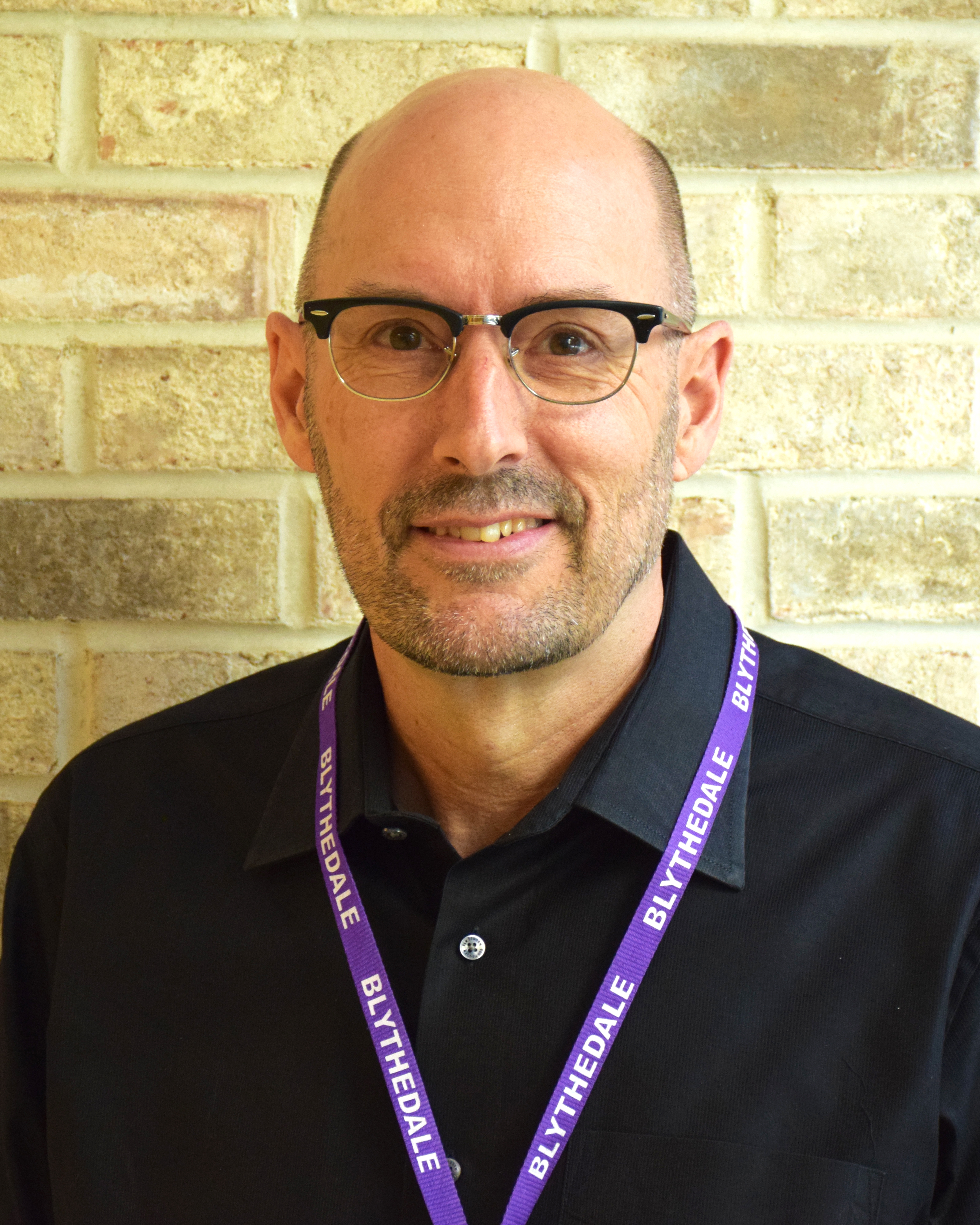 In a relatively short time span, the Collaboration has garnered support in the scientific community through recent external validations, including publications and two prestigious grants for the Vision Recovery and Motor Recovery programs from the National Institutes of Health (NIH), which funds the majority of the biomedical and public health related research in the United States.

“We’re trying to measure vision in children with neurological impairments who lack the ability to communicate or understand,” said Dr. Prusky, Director of Vision Recovery.

It’s the first time that those kids are able to convey to us they can see, which will in turn help us improve their visual function with therapies. It’s very gratifying.”

He adds that visual dysfunction is common in children with brain injury, but its severity is often unknown. Dr. Prusky and his team devoted several years to developing tools that would diagnose cerebral visual impairment (CVI; visual impairment in children due to brain injury) from eye movements. It began with the measurement of vision in rodents at his lab at Burke Neurologic Institute and evolved over time to become applicable in humans. 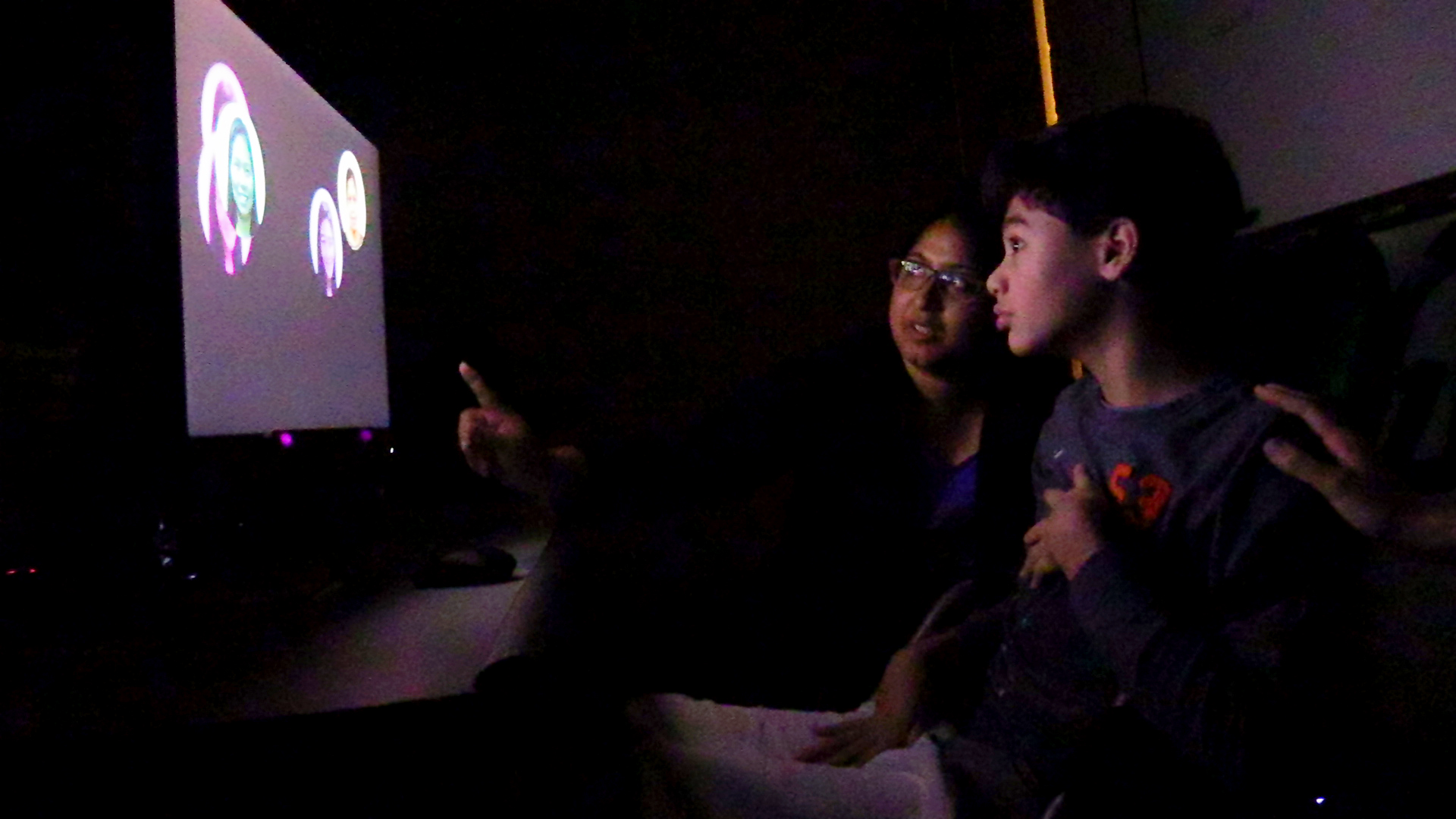 “It now involves a computer to display visual stimuli, an eye-tracking device to measure where a subject is looking and some pretty nifty technology and clever programming,” said Dr. Prusky.  “A child smoothly follows an image on the screen with their eyes for a few frames while music is played for encouragement - which provides objective evidence that they can see it - then the stimulus features are changed until they can no longer follow, which quantifies the limit of the visual ability in a matter of seconds.”

In June, the Collaboration’s Vision Recovery program began its five-year, $3.1 million NIH-funded study with the National Eye Institute to validate this new approach and identify/grade CVI in many brain-injured children to predict a potential course of visual recovery.  The evidence-based approach is expected to set the stage for future clinical studies aimed at objectively evaluating the efficacy of therapeutic interventions for CVI.

The second NIH grant received by the Burke-Blythedale Pediatric Neuroscience Research Collaboration was for the Motor Recovery program, led by Dr. Kathleen Friel.  The $1 million award began in September 2018 and runs through August 2023 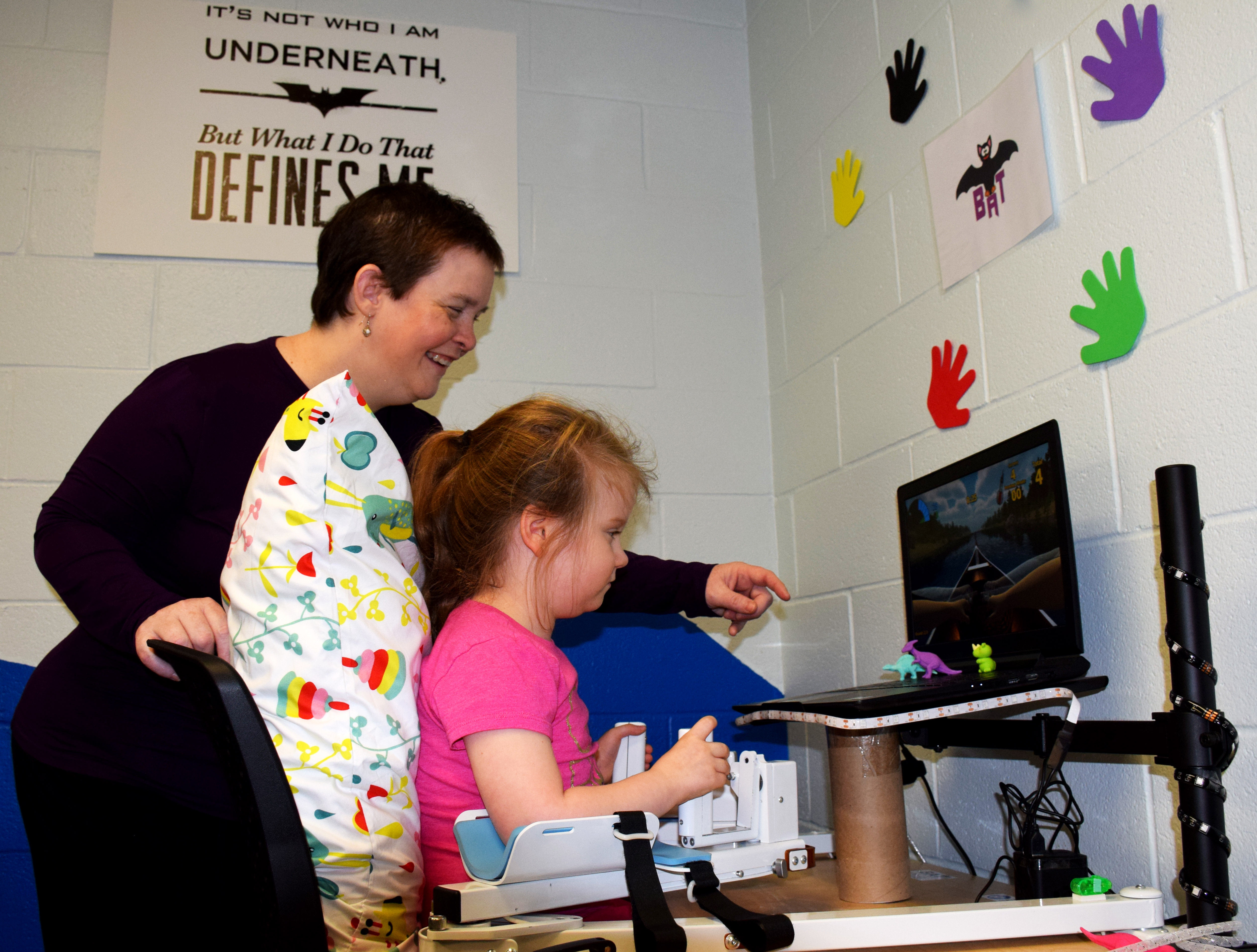 “People think of movement as just action, but really when you’re moving, you’re using sensation, you’re using vision, you’re using your sense of where your body is in space,” said Dr. Friel.  “All of these sensory components affect how kids move and we’re trying to understand how the brain controls that in order to improve limb function, figure out how the brain responds to therapy and eventually, design the best therapies for pediatric patients.”

In addition to their work analyzing how sensation impacts a child’s ability to move, Dr. Friel and her team collaborate with the Occupational Therapy department to measure the effects of therapies offered at Blythedale on a child’s hand function. “The best recoveries happen when there’s intensive practice,” explained Dr. Friel.

The Burke-Blythedale partnership is making this happen with research expertise, and highly skilled clinicians and technology, coming together to help the kids who really need it.”

Despite two NIH grants in hand, the Burke-Blythedale Pediatric Neuroscience Research Collaboration is not resting on its laurels.  Instead, they are hard at work applying for a third. 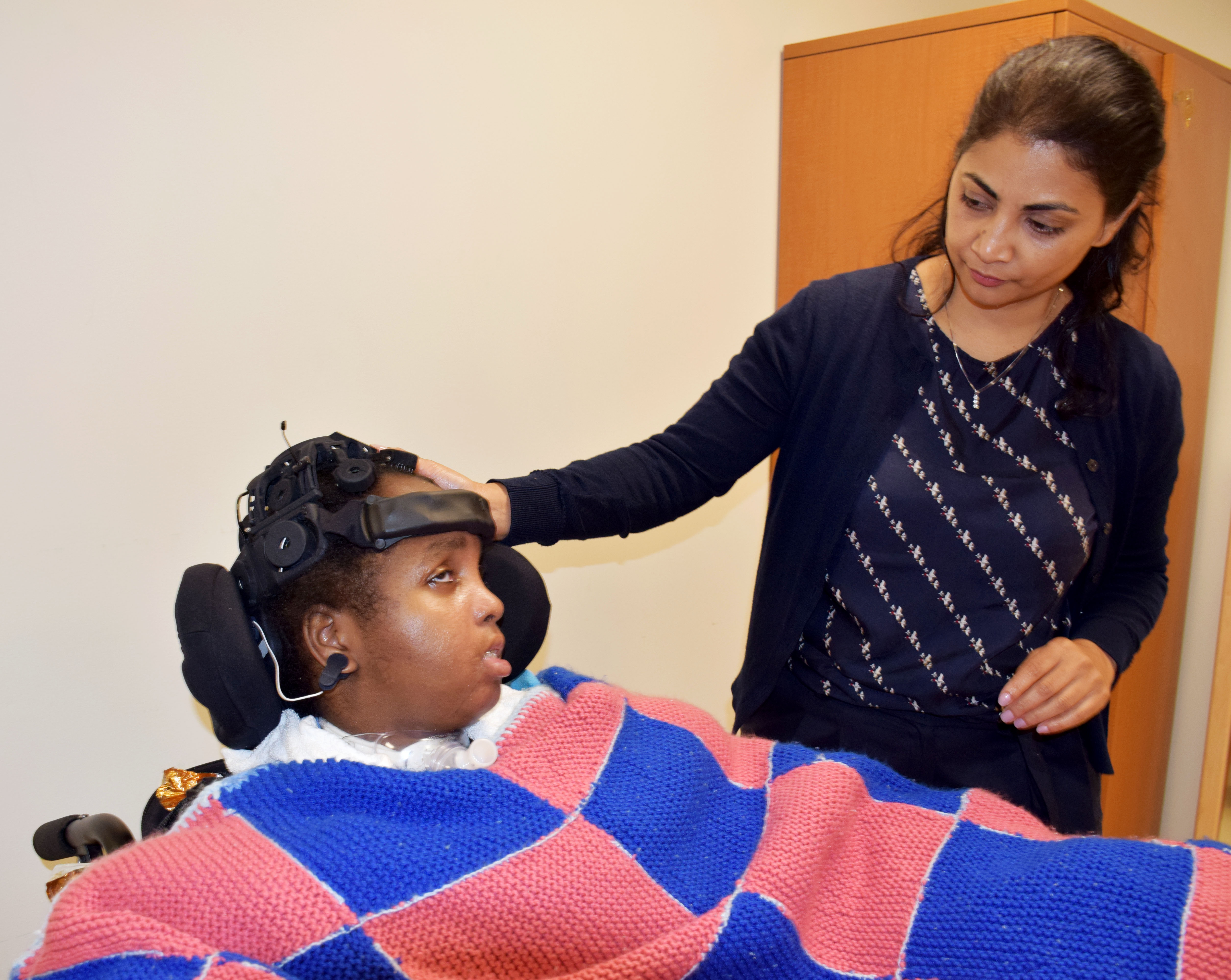 In fact, its Cognitive Recovery program, directed by Dr. Sudhin Shah, is focusing on the challenges in assessing residual cognitive function and tracking of cognitive recovery following an acquired brain injury.  Over the past two years, an assessment protocol of clinical/research tools have been tested and used for every child admitted to Blythedale with a brain injury. This has resulted in over 100 pediatric patients being tracked on either clinical tools and/or research tools. This places Blythedale among very few pediatric hospitals in the country to carefully measure and track in the same manner, every child admitted to the hospital.

“We’ve made some big steps toward being able to measure every child in a structured manner here at Blythedale,” said Dr. Shah.  “But, while we can see that many of these kids are improving, we don’t yet have a good understanding of why and we don’t know if  therapeutic interventions can improve it.”

The latter question of how to treat disorders of consciousness prompted Dr. Shah’s upcoming study of a randomized placebo-controlled trial of Amantadine, a drug used to treat the flu, available since the 1960s.  Recent discoveries have found Amantadine effective in improving the rate of recovery in brain-injured adults, but there is nothing showing its efficacy in pediatric brain injury.

To address this, The Burke-Blythedale Pediatric Neuroscience Research Collaboration has created a Pediatric Brain Injury Consortium with several other premier children’s hospitals around the country to pool data across the sites and answer systematically the open questions regarding the use of amantadine in pediatric brain injury.

“We presented the proposal to the NIH funded Trial Innovation Network and after careful evaluation, they have partnered with us to submit a grant application to NIH in October 2019 for the Amantadine trial,” said Dr. Shah.

There’s so much that’s unknown in what happens after a child suffers a brain injury. This is not just a Blythedale problem or a New York State problem, but a state of science problem, and we’re trying to fix that.”

As the Burke-Blythedale Collaboration enters its third year, the next phase of research is an exciting one with interest in metabolic-based research programs, examining better ways to screen at-risk brain-injured children (under two-years old) for CP and positioning the partnership to be one of the national leaders in neurorehabilitation.

“It’s really remarkable that we’ve come so far, so fast,” said Dr. Friel.  “It’s a testament to Burke and Blythedale leadership who believed in us.”

“The exciting aspect of this collaboration and these studies is the impact it potentially has on a much larger population of children with complex medical needs,” said Blythedale President & CEO Larry Levine.

The insights we are uncovering stand to benefit children across the world. We are so proud to partner with Burke on work that is truly transformative.”

“The unfortunate reality is that the most transformative discoveries related to curing disability in kids are not reaching patients,” said Rajiv R. Ratan, M.D., Ph.D., Executive Director of Burke Neurological Institute. “Our collaboration leverages unique strengths that each of our institutions has in research and clinical care to accelerate the ethical and safe application of innovative ideas to the bedside of disabled children. I can think of no more important greater aspiration than to provide hope for cures through rigorous science and compassionate clinical care. The Burke Neurological Institute is proud to be part of this partnership which will become a beacon for pediatric clinical neuroscience internationally.” 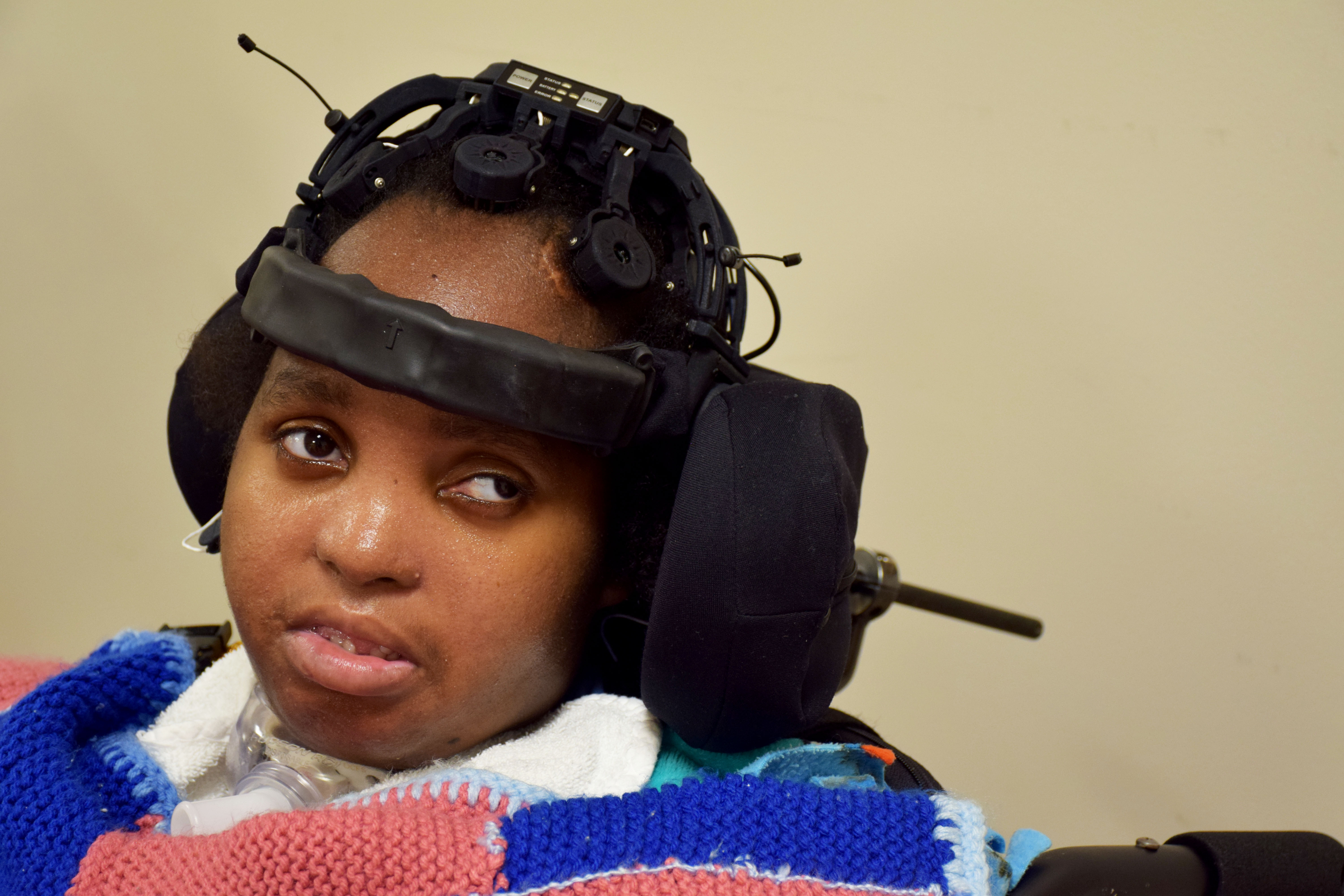 As research helps move science forward, it’s the families and patients that are playing a major role in changing the face of pediatric neuroscience. Not only is each child a volunteer in the Burke-Blythedale Collaboration, but they are also a researcher in their own right - conveying to scientists and clinicians what works and what doesn’t, to help brain-injured children today and in the future.

About Burke Neurological Institute
The Burke Neurological Institute is a research institute dedicated to finding cures for chronic neurological disabilities. We transform groundbreaking research into clinical treatments so that people can see, talk, and walk again. Hope demands innovation and brilliant science, and every day with our academic affiliate, Weill Cornell Medicine, we transform groundbreaking research into promising neurological treatments. Our specialized clinics (called quaternary care clinics) will revolutionize the therapeutic pipeline—speeding up the process of turning insights from the lab into life-changing results for patients with neurological impairments.

About Blythedale Children’s Hospital
Blythedale Children’s Hospital is New York State’s only independent, specialty children’s hospital and one of only 14 pediatric specialty hospitals in the United States. Serving patients from birth through age 19, Blythedale has the combined staff, expertise and resources – including the largest pediatric therapy department in New York State – to provide exceptional comprehensive care for medically complex children and support for their families. Children are admitted for a variety of medical conditions, including respiratory, traumatic brain injuries, pulmonary hypertension, high tech feeding, complicated 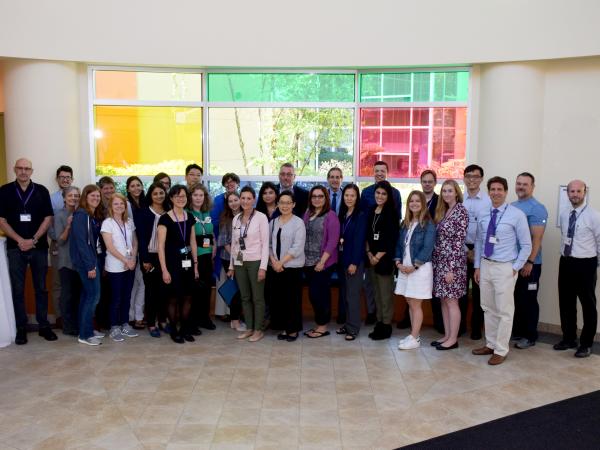 August 15, 2018 Over the course of 12 months, data was collected from thousands of neurological tests on more than 40 pediatric patients with brain injuries using a system developed by researchers at Burke... 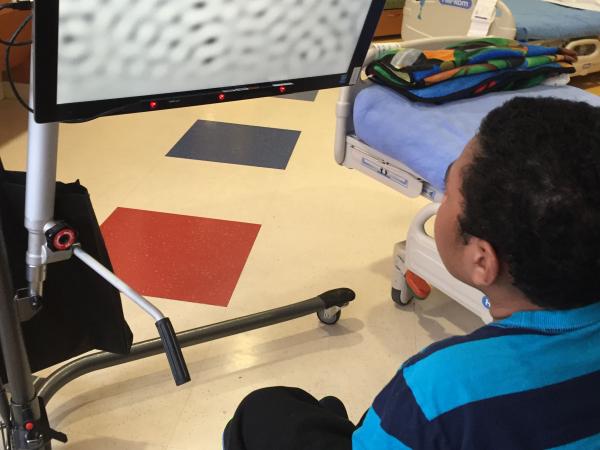 July 30, 2018 Traumatic brain injuries, cerebral palsy, childhood stroke, and vision loss due to brain injury affects how a child can see, recall information, communicate and walk from onset to adulthood... 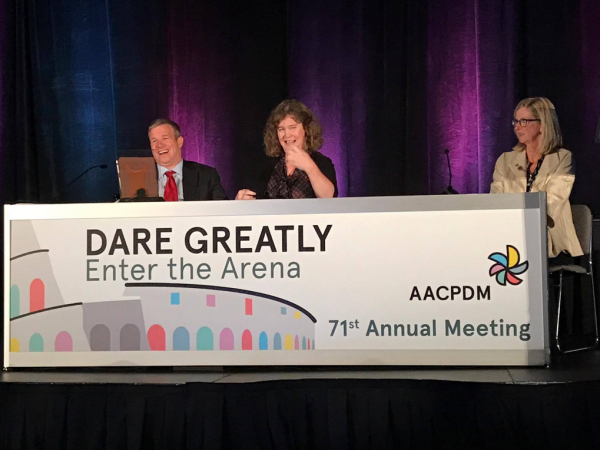 October 26, 2017 On September 15, The American Academy of Cerebral Palsy and Developmental Medicine presented Kathleen M. Friel, Ph.D. with the 2017 Corbett Ryan Pathways Pioneer Award for her work in brain...
View All News