My name is Cara Macdonald, and I am a former patient at Blythedale. I believe it was Dr. Rackley, my neuropsychologist, who asked me, as part of a series of simple questions to test my awareness, who the president of the United States was. I still think back today about how shocked I was, even in the moment, that I couldn’t answer this question.

As it turned out, this was because during the election, I had been hit by a car and suffered a traumatic brain injury. The ambulance responded quickly, and I was soon airlifted to Westchester Medical Center, about an hour away from my hometown of Westport.

To my knowledge, I spent the next few days there as my condition stabilized. By some miracle, I escaped with no broken bones, just stitches to my head. I am incredibly lucky that just days before, a room had opened up in Blythedale Children’s Hospital’s Traumatic Brain Injury unit. I was fifteen years old at the time.

I spent a total of 75 days here, which is a long, long time to be anywhere away from home.  Even after my coma, the early days at Blythedale were filled with sleep, pretty much at all hours. Later, my close friends would tell me about the times when they came to visit me and tell me stories, and how it felt like talking to a wall. I would just fall asleep in the middle of their sentences, or whatever words of comfort they had come to share with me. I may not remember them being there, but I know the presence of my friends and family, along with countless prayers from home, gave me the comfort and strength to recover as beautifully as I did.

When I was able to stay awake for longer periods of time, I began therapy at Blythedale. I cannot thank the three amazing women who helped me through these times enough, for giving me back the skills I had lost. Esty, my occupational and feeding therapist, helped me fight memory loss, and push through the struggles of eating when I couldn’t remember how to chew or swallow. My daily breakfast date Deb was my bubbly speech therapist who connected with me in more ways than one. She and I talked about rowing, the sport her sister did in college and that I missed so dearly back at home.  And my beautiful physical therapist, or rather “physical terrorist”, Yanira, helped me push through those torturous exercises that would seem so simple to any one of us today, and helped me walk again slowly but surely. Yanira’s new baby could not have picked a better mother if she had the choice.

Even though I was regaining muscle fast, it was incredibly frustrating for me to be wheelchair-bound, when I couldn’t even use the bathroom by myself. These three women helped me through the struggles of regaining the skills I will never again take for granted.

As time went by, I came to understand my injury and my limitations. I eventually sort of accepted my need for a wheelchair or walker, even to go to the bathroom in the middle of the night. I started writing everything down, something I still do today to compensate for my memory issues. But one thing I know I’ll never forget are the smiling faces of Catherine, my psychotherapist, Doctors Rackley and Alejandro, and my therapists, nurses, and plenty of other unsung heroes at Blythedale. These people watched me reach milestones, from whispering to speaking, walking to climbing stairs.

I made a few friends at Blythedale who made my seemingly never-ending experience in the hospital a little less painful. My father immediately took to a four-year-old boy in a neighboring unit, Dawaney, who had two broken legs. Dawaney would race through the hallways like he was born on that wheelchair, and my father used to always invite him to my room. His noisy, high spirits brought a positive energy, and I really grew to like the kid. Last year’s speaker Nicole, is a girl around my age from a town close to Westport. By New Year’s Eve, she and I were watching my idol, Taylor Swift, rock the stage in Times Square with a couple of her friends. For the first time since the accident, I felt like a normal teenager, hanging out with friends. My discharge date was set to January 11th, and I anxiously awaited the day I returned to my home and my sense of normalcy.

The night of November 2, 2012, could have gone so many ways; I happened to be incredibly lucky, and have made a fuller recovery than anyone could have asked for. Without the unwavering support from Blythedale Children’s Hospital, I simply couldn’t function the way I do today, and I can never thank enough the people who made my recovery possible.

Obviously, I could go on about this incredible facility, and am so lucky to be able to say that. Now my life has returned to as close to the norm as it could possibly do, and my future, which was almost stolen away from me, waits. With what Blythedale has done for me, I don’t think I will ever be able to repay them- but my friends and I won’t stop trying.

At Christmastime, my friends fundraised over $1200 to donate to the hospital, which it used to purchase iPads and technology to allow patients to interact and learn with their friends and peers. It was a touching moment to see how my friends’ hard work and donations were paying off at last year’s Christmas concert, when the iPad robot wheeled into the room and a little girl’s smile glowed on the screen.

I still struggle with my memory sometimes, but I know I’ll never forget those moments of care given to me by the people working at the hospital. Every patient who has passed through Blythedale’s doors will tell you the same thing; this facility restores the gift of life for those who have come so close to losing theirs. 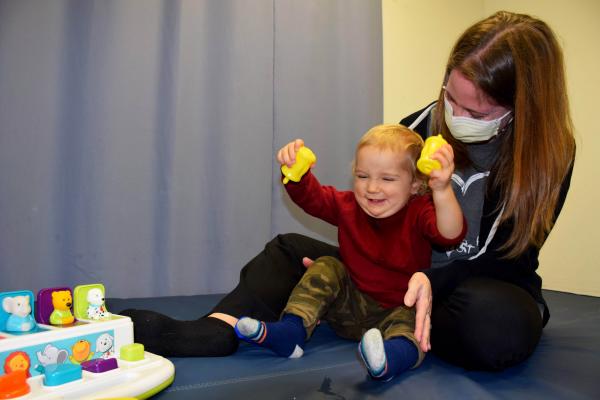 Traducción Española Elder has a big heart and loves many things—namely his family, friends, the Incredible Hulk and the New York Yankees. You can usually find the eight-year-old in his inpatient room cracking jokes and laughing during therapy sessions, or donning a Yankees tee shirt while...
Explore All Stories