Rafeena Ali looks at her two-and-a-half-year-old daughter Angel Grant and still can’t believe what she sees: a little girl who’s babbling, zooming around the house, and copying everything she sees on Dora the Explorer. "You’d never know how tiny and sick she was,” says Ms. Ali. "There were tubes everywhere."

Weighing only 1.6 pounds when she was born, Angel was immediately transferred to Mount Sinai Medical Center’s neonatal intensive care unit and placed on a ventilator. When she was referred to Blythedale six months later, her prospects were still uncertain. Like all extremely premature babies, she was at risk for a host of life-threatening medical and developmental problems.

While more than a dozen different Blythedale specialists worked with Angel, her treatment coalesced around one primary goal: weaning her from the ventilator. It’s a painstaking process in which success is measured minute by minute, but it’s also an area where Blythedale is a national leader. Eighty percent of the children who arrive at Blythedale dependent on a ventilator are weaned from the machine by the time they’re discharged.

Ms. Ali and her husband weren’t relegated to the sidelines during Angel’s recovery. In fact, Blythedale was the first hospital in New York State to train parents how to maintain their child’s ventilator care at home. "I didn’t want to go near that thing,” Ms. Ali says of the ventilator.

But Blythedale built up my courage. I don’t know how anyone could go through what we did without having Blythedale. No other hospital could do what they do.

A few months after her second birthday, Angel was fully weaned from her ventilator and came back to Blythedale for a very special ceremony: removal of the trach tube. "They told her she was all done with it – she could pull it out herself,” says Ms. Ali. "So she did – and threw it in the garbage!” 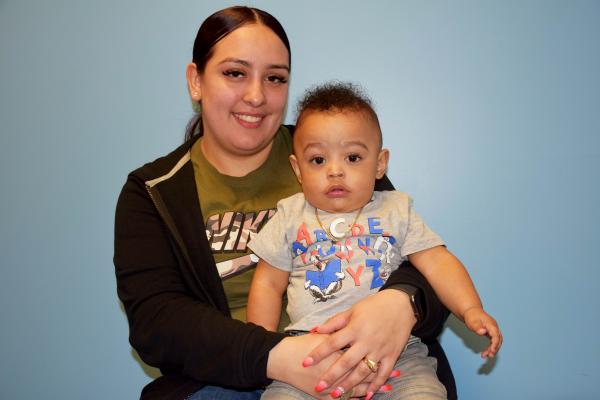 Raymond has got some serious moves. The 14-month-old can roll over, push himself up to a sitting position and even use both hands to play with toys. Some pretty impressive skills considering what he had to overcome. In January 2018, an unexpected pre-term delivery brought him into the world at just...
Explore All Stories